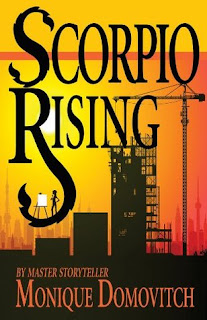 BLURB:
Set in New York and Paris amid the glamorous and competitive worlds of art and real estate, Scorpio Rising takes the reader from the late 1940s to the 1960s through the tumultuous lives of its heroes. There is Alex Ivanov, the son of a Russian immigrant and part-time prostitute. He yearns to escape his sordid life and achieve fame and fortune. His dreams of becoming a world-class builder are met with countless obstacles, yet he perseveres in the hope of someday receiving the recognition he craves. Half a world away, Brigitte Dartois is an abused teenager who runs into the arms of a benefactor with an agenda all his own. When she finds out that her boss has an ulterior motive, she flees again, determined to earn her living through her art. This career brings her fame, but also the unwanted attention of her early abuser. Monique Domovitch’s debut novel, Scorpio Rising, is a compelling tale filled with finely etched characters and a superb understanding of the power of ambition. Scorpio Rising promises to resonate with all who once had a dream.


Scorpio Rising is a well written book with a great plot. It tells the love story of Alex and Bridgette while covering their lives from childhood.
Alex raised by a single mother wants to rise above himself and leave his poverty behind. His architectural acumen gives him this opportunity.
Bridgette, an artist, is distrusting of people especially men and cannot seem to escape her past.
Will they find love together? Will Bridgette be able to trust Alex? Will Alex be willing to be himself with Bridgette or will he still maintain a front?
A bit slow in the beginning, the story picks up pace and the result is romantic page turner.
Part of the Scorpio Series, this is the first book and I look forward to reading the sequel. 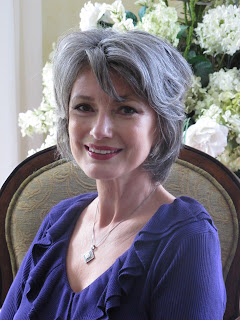 BIO:
Monique Domovitch is the author of Scorpio Rising and The Sting of the Scorpio. She also writes under the pen name Carol Ann Martin for Obsidian, an imprint of Penguin. She is represented by Natalie Fischer of the Bradford Literary Agency, and lives with her husband and her three dogs in La Jolla California.
Monique Domovitch was born the first in a family of ten children in a small town in Northern Ontario, and maintains to this day that she was not harmed by the experience. She attended The Sacred Heart Convent, an Ottawa boarding school where she learned to keep her hands folded neatly in her lap and to smile vaguely when people use profane language around her. Her first job was in Montreal as a fashion model, and she is credited with inventing the famous pouty pose that is now used by top models everywhere. She has turned thirty nine again this year and pledges to do it over and over. Just like everybody else in the world, she is working on a new novel, this one, her fourth.