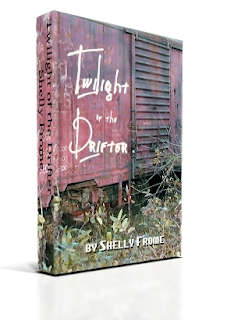 “Twilight of the Drifter” is a crime story with southern gothic overtones. It centers on thirty-something Josh Devlin, a failed journalist who, after a year of wandering, winds up in a Kentucky homeless shelter on a wintry December. Soon after the opening setup, the crosscurrents go into motion as Josh comes upon a runaway named Alice holed up in an abandoned boxcar. Taken with her plight and dejected over his own squandered life, he spirits her back to Memphis and his uncle’s Blues Hall Cafe. From there he tries to get back on his feet while seeking a solution to Alice’s troubles. As the story unfolds, a Delta bluesman’s checkered past comes into play and, inevitably, Josh finds himself on a collision course with a backwoods tracker fixated on the Civil War and, by extension, the machinations of the governor-elect of Mississippi. In a sense, this tale hinges on the vagaries of chance and human nature. At the same time, an underlying force appears to be driving the action as though seeking the truth and long awaited redemption. Or, to put it another way, past sins have finally come due in the present..

1. Can you tell us a little more about yourself?

Perhaps the blurb on the back cover of my recent novel might do as an intro. In any case, it was written by someone else and will spare me any self-promotion which, frankly, I’m just not good at:

Shelly Frome is a member of Mystery Writers of America, a professor of dramatic arts emeritus at the , a former professional actor, a writer of mysteries, books on theater and film, and articles on the performing arts appearing in a number of periodicals in the and the He is also a film critic and a contributor to writers’ blogs. His fiction includes Lilac Moon, Sun Dance for Andy Horn, Tinseltown Riff and the trans-Atlantic cozy The Twinning Murders. Among his works of non-fiction are The Actors Studio and texts on the art and craft of screenwriting and writing for the stage. Twilight of the Drifter, his latest novel, is a southern gothic crime-and-blues odyssey

2. What do you do when you are not writing?

That’s an interesting question. As an incurable storyteller, I find that I’m always daydreaming and working on something. I frequently have to stop myself and attend to practical matters and other considerations including taking care of my Golden-doodle puppy who frequently needs attention, outings and walks.

I remember some time ago creating a series of cliffhangers for my friends in study hall back in the eighth grade in . But I really didn’t consider myself a bona fide author untill both my book on playwriting and my novel about an embattled young man in the Black Hills of South Dakota were published at about the same time around 1990.
4. How did you choose the genre you write in?

As a reader I found I could only get interested if I could identify with the characters, especially the central figure, and there was something vital at stake. So, imaginatively, some character’s world was turned upside down and there was some impending danger the only possible venue was a form of crime fiction. I should add that, more often than not, each venture just comes to me, some meaningful quest to, say, right some troubling great wrong.

5. Is there any particular book or author that influenced you as a child?

I have to admit that like most young boys my age I was quite taken by classic adventure stories like and The Three Musketeers. A few years later my tastes became a bit more subtle and I started reading the tales of Ray Bradbury. The stakes still high but on a more unique and fanciful level.

6. What was your favourite chapter(part) to write and why?

There’s always that moment we’re all afraid to face, that heightened situation that could lead to all kinds of dreadful consequences. In my current novel Josh, my central character, has wandered deep into the backwoods of in the dead of night. He has done so to try and rescue Alice, the headstrong 14-year-old runaway who has no idea what she’s getting into. Josh could look for some safer alternative, but he’s reached the point of no return. The odds are totally against him. It’s something he has to do even though he doesn’t have a fighting chance. And that’s always the best.

7. What are the challenges you faced in getting your first novel published?

The major challenge was accepting the fact that I had no idea whether my tale of an embattled half-breed had any chance of interesting anyone in the publishing world. Just because I was involved and found myself captivated by the unfolding situation, who knew what anyone else might think? By and large, they might find it all shopworn or derivative. They might just feel there is absolutely no market for this sort of thing. I might receive a number of form-letter rejections and no personalized response at all. At what point do you keep hanging in there? Fortunately a publication out West found the underpinning authentic and the issues worthwhile even though I wasn’t a Native American.

8. What advice would you give to aspiring writers?

There are so many so-called author websites that are fixated on hawking a product. No energy at all is spent on appreciating the works of great writers or even talented writers who have gone before and are writing now. Instead of joining the multitudes who seem to think anybody can crank out a novel and self-publish it in e-book form or what have you, it might be more satisfying to read the best in any chosen genre. Write and rewrite according to some literary standards, seek out professional editing or at least feedback from a writer who has earned his or her stripes and take it from there. Develop your craft and hone your gifts first. Then submit to agents and publishers if you like, or take any road you desire. And, of course, seek out the company of kindred spirits so you can encourage each other. Needless to say, writing fiction can be a lonely pursuit and it’s quite easy to lose your enthusiasm and/or your integrity.

9. What project are you working on now?

Apart from waiting for a copy editor to be assigned for my escapade, I’m working on a new novel with the working title Murder Run. I’m exploring the trials of a hired hand who becomes embroiled in the untimely death of his lady employer. How does a person who has no experience at any kind of detection exonerate himself while trying to put things right? Especially someone who doesn’t talk much and spends most of his time landscaping, fixing things, gardening and building gazebos, pergolas and the like? At present, I don’t quite have the answer.

10. Is there anything you would like to tell your reader or fans?

If some of you wouldn’t mind going on Amazon and perusing the latest reviews for Twilight of the Drifter, it would be helpful if you would then inform Jacinta whether my venture sounds as intriguing as I’d hoped.  In turn, Jacinta will let me know as long as long as I can persuade her to break it to me gently. 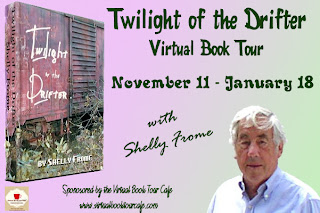 Homemade Yogurt with Yo Magic

Our Sambucol Back To School Party with Tryazon

Back To School with Crayola’s Take Note! Range

8 tips for traveling with children

An American Easter without Easter eggs? Not likely!!